Markets have started off on a rough note to begin 2022. The fear of a reduction in market accommodation as the Fed pulls support and (likely) hikes rates has spooked markets.  In response to rising rates, persistent inflation and a less friendly Fed, stocks have traded lower.  This is especially true of the more “growth” oriented stocks.  It seems like we’ve seen this scenario before…about 12 months ago.  It is easy to forget, but 2021 started out with rates rising quickly and growth stocks getting hammered.  That turned around in March as we saw rates drop again.

Now, rates are rising again, and it is assumed given the Fed’s recent notes and speeches that it will hike rates this year (4x is currently priced in the market).

Even though we have seen a lot of “risk off” behavior in stocks, the good news to this point is that credit spreads on high-yield bonds have not widened.  When spreads widen, that is a sign that bond investors are getting spooked that companies will start to default.  Bond investors tend to be quite good at sniffing out potential problems in the markets (check out how the spread shot up dramatically just as Covid hit in 2020).  At this point, the credit spread is a little over 3%, and has dropped since November. 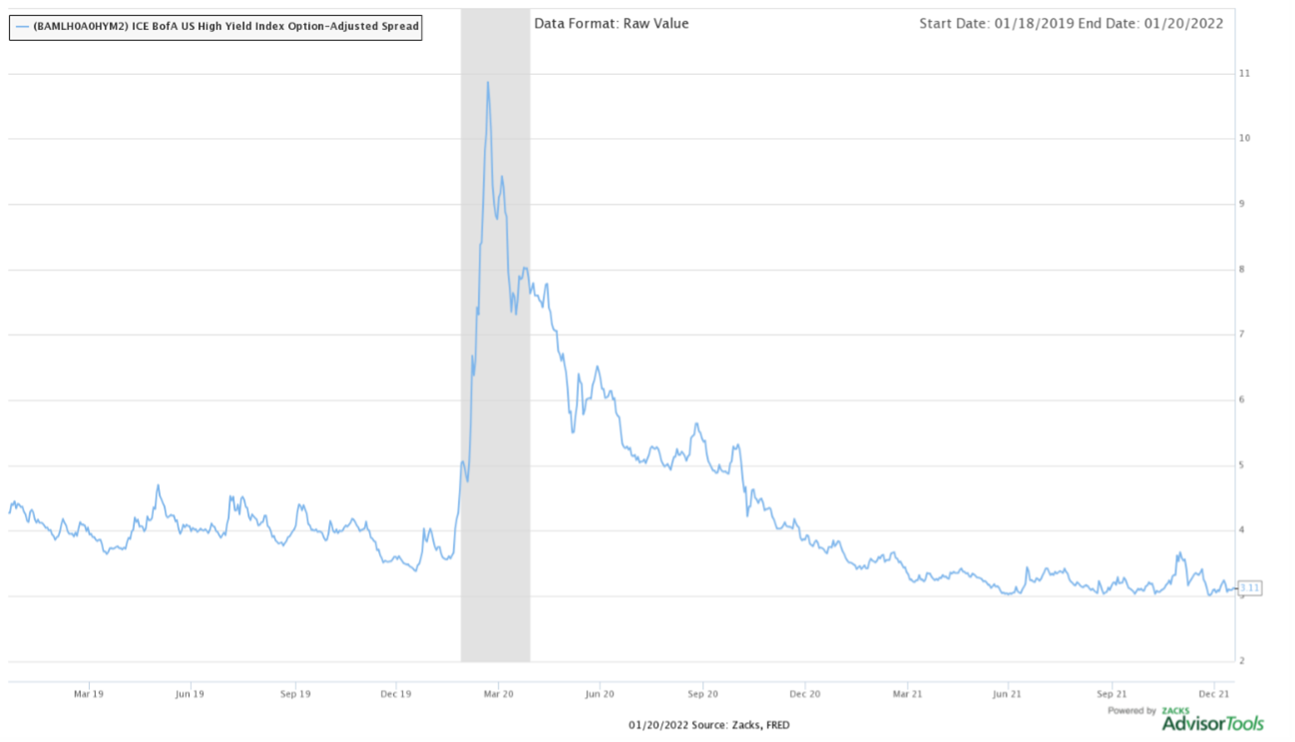 And the Bad News

There is always good news and bad news, isn’t there?  While credit spreads are still very tight, we have seen a “flattening” of the 10-year / 2-year interest rate chart.  In “normal” economic times, the 3-month interest rate is less than the 2-year rate is less than the 10-year rate, and so on, which makes sense – the longer the term, the higher the risk and thus higher the rate.

Like with credit spreads, bond investors look ahead in the economic cycle.  If they foresee lower growth in the future, the longer-term rates will stay low even while the short-term rates increase (sometimes driven by the Federal Reserve).  This causes the interest rate curve to “flatten” and is a widely followed economic indicator.  If the 2/10 spread becomes inverted (or negative), then it tends to be a great indicator of a recession to come (though, the recession could still be a year or two in the future).

We have seen a flattening of the yield curve in expectation of the Fed rate hikes, but we are still a long way from the curve inverting (dropping below 0 on this chart).  Notice how it even dropped below 0 in 2019; there was no way to predict Covid would hit, but the economy was headed in a downward trajectory anyway. 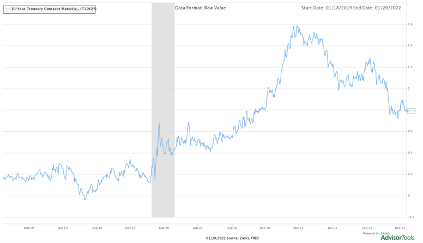 Until recently, the Fed thought that erring on the side of being overly accommodative was preferable because inflation was not a threat. While we are not at the point where inflation or inflation expectations are out of control, the risk is increasing and so erring on the side of hawkishness is now becoming more attractive. The political cost of faster tightening is also diminishing, as few politicians these days seem inclined to downplay the risk of inflation.

Inflation is now a political issue – President Biden recently indicated that bringing down inflation is now his top priority. We are hearing the same questions from Senators of both parties as they have questioned Powell aggressively at recent testimonies. The Fed is independent, yes, but they are also accountable to Congress and can’t entirely ignore the direction of politics, especially in a mid-term election year.

Right now, the Fed’s balance sheet is nearly $9 trillion – Jerome Powell stated in his hearing earlier this week, “It’s far above where it needs to be.” He also reminded us that the Fed hasn’t made any decisions on whether they would sell assets off their balance sheet, but also commented that they hadn’t ruled it out, either – “It’s something we will be looking at.”

Seems like most participants are focused on the Fed aggressively hiking rates this year (4 rate   hikes are currently priced in) with lift off beginning in March, immediately following the end of QE. We’ve even seen an increase in the possibility for a 50bps (0.5%) hike in March (the last time the Fed hiked by 50 bps in one meeting was almost 22 years ago). Could market assumptions be missing the mark? We think the likelihood of less hikes and more assets sales in ’22 is a real possibility. A preferable one in our opinion for a softer landing.

Back in 2010, Jim Bullard rallied the Fed troops to look at asset sales as the first order of removing accommodation from the markets BEFORE hiking interest rates. Rates didn’t move until the end of 2015 and the asset sale discussion was put aside. In 2017, Janet Yellen termed the idea of balance sheet reduction as “paint drying” where securities that matured weren’t replaced, specifically no asset sales, as they would just roll off at maturity. To note, there actually was about $200bn in agency MBS sold off the Treasuries balance sheet (product of QE0 in ’08) in early ’11 – with no problem. So – it has (quietly) been done!

So why haven’t asset sales been a more popular tool versus rates hikes as a mechanism to tighten policy? The answer gets a little complicated. Banks make free money on excess reserves and the higher front end rates go, the more money they make. For example, in ’15, before liftoff there were $2 trillion in excess reserves in the system. Every 100bps hike in the Fed Fund’s rate yields about $20bn in interest income for participating banks. As a side note, prior to ’06, it was illegal for the Fed to pay interest on reserves. Banks lobbied and banks won and in ’08 it become status quo for banks to get paid for their reserves (never let a good crisis go to waste?). Simply, monetary incentives drive the bank’s plea for more rate hikes and less asset sales (if you think a little deeper, banks own many of the same FI instruments the Fed does and in turn would be selling – less buyers and more sellers probably leads to lower prices).

While this is all a bit technical and nuanced, the bottom line is these numbers are astronomical and in turn likely hard to hide from the public. Between Elizabeth Warren’s distaste for banker’s and conservatives’ views of lowering the Fed’s balance sheet, we could see a rare alignment of forces when it comes to handling the current monetary debacle.

What is the Solution?

Right now, the market is pricing in four rate hikes in ’22. Many view an aggressive Fed as having the potential to derail the economic recovery too quickly by over tightening financial conditions. We believe this is the reason we’ve seen a flatter yield curve. In addition, while current inflation is high, assuming as goods inflation slows and supply chain issues recover, it’s reasonable to assume inflation slows substantially by the end of year. With that in mind, are four rate hikes, too much (I.e., hiking into slowing growth and inflation)?! We think there COULD be another, more amicable solution.

If the goal is to remove accommodation, does it matter how the accommodation gets removed? We see a potential for fewer rate hikes and more asset sales. The Fed rule of thumb is for every $100bn in asset purchases/ sales it is equivalent to an 8bps rate cut/ hike. Can the Fed sell enough assets to offset the need of hiking rates 3-4 times in ’22?

Potential Recipes: Hike 3-4x in ’22 (Status Quo at this point); Two rates hikes and $25bn per month in sales; One hike and $50bn per month in sales. Either way, in option 2 or 3, accommodation gets removed and the balance sheet starts to shrink from its elevated level. Overall, we think this could check multiple boxes: #1 keep the curve steep (inverted curve = BAD); #2 Slow the housing market (fueled by artificially low rates); #3 Appear as hard on big banks (looks good in the eyes of us small folk). Maybe crazy man Bullard was onto something?!